Amazon continues to grow every year and so do its sellers. We’ve surveyed 82 Canadian third-party sellers, and this report summarizes the most important information we’ve gathered from the study.

Between October 6th and November 30th, 2021, EcomCrew surveyed 82 Canadian Amazon sellers who sell on Amazon and who have at least one product listing live on the platform.

The Ecommerce Landscape in 2021

The Profile of a Canadian Amazon Seller

Nearly three-fourths of Canadian sellers on Amazon are male.

Women make up 31.8% of Canadian Amazon sellers, the majority of which are between 39 and 64 years old. On the other hand, of the 68.2% who are men, 35.37% of them are between 18 and 39 years old. This means that men start an ecommerce business on Amazon at an earlier age than women.

Canadian Amazon Sellers and Their Type of Business

There are a handful of decisions to make when you decide to start selling on Amazon, such as what marketplaces to sell on, what fulfillment method to use, or what type of business to choose.

What Marketplaces Do Canadian Sellers Sell On?

Based on the survey, 43.9% of Canadian sellers list their products only on Amazon.ca while 24.24% decided to sell on both Amazon.com and Amazon.ca.

So a significant percentage of Canadian Amazon sellers decided to not expand their businesses to other Amazon marketplaces in 2021.

However, there are a lot of advantages in selling on other marketplaces. The sales channels that arguably have the highest probability of earning the biggest growth for your ecommerce company are other Amazon marketplaces, specifically Amazon.com, Amazon.co.uk, and Amazon.de.

What Fulfillment Method Do Canadian Amazon Sellers Use?

Despite the limitations of Amazon’s warehouses due to the pandemic in 2021, most Canadian third-party sellers (95.45%) said that they use Amazon FBA services.

Fulfillment by Amazon (FBA) means having Amazon store, pick, pack, and ship your orders out for you with corresponding fees and also with a few in-house features designed to streamline your selling experience.

Among Canadian sellers on Amazon, private labeling (53.03%) is the most popular sales model. This model requires more time and energy as sellers need to find a niche to build their ecommerce company around and then find products to develop. This is made more difficult by the fact that the ecommerce world is becoming more competitive, so you need to stand out from your competition in order to succeed.

Other types of ecommerce business systems are more beginner-friendly like retail arbitrage, online arbitrage, and wholesale.

Finding the Right Niche and Products

Finding great products to sell in the right niche is the key factor in running a successful Amazon FBA business.

Most successful Amazon sellers don't make a full-time income by selling just one product. They build and sell a catalogue with several different products.

Finding the right niches and high-quality products lay the foundation for a successful ecommerce business with a fairly high income.

A significant percentage (48.48%) of those surveyed spend less than 20 hours each week on their Amazon business while 31.82% spend between 20 to 40 hours per week. Meanwhile, only about a fifth of them spend as much time on their business as a full-time employee would.

How Canadians Are Driving Traffic from Off-Amazon Sources

Definitely, Amazon is the place to sell for Canadian sellers who affirm that their top sales channel is the Everything Store (89.39%).

While 54.55% of Canadian sellers have their own ecommerce website, 45.45% don’t own one, despite the fact that having your own website can be used to boost your conversion rates on Amazon.

Other channels, like Walmart, are simply a bet on future growth. And finally, there are a number of niche-dependent sales channels like Etsy, Houzz, and eBay, which can result in very strong sales if your product assortment matches those channels’ target market.

The Challenges of Selling on Amazon as a Canadian

A lot of things were up in the air in 2021, especially for ecommerce sellers. From the massive increase in sea freight rates, the ever-changing Amazon restock limits, stricter privacy regulations that hurt targeted marketing campaigns, to the steadily increasing number of competitors looking to take advantage of the COVID ecommerce bump.

Half of Canadian Amazon sellers said that Amazon's policies and restrictions are their biggest challenge in growing their businesses.

Their second biggest challenge is getting customer reviews (18.18%). As we know, reviews are critical to a product’s success on Amazon. Ever since Amazon removed incentivized reviews, getting reviews has been harder and harder for Amazon sellers.

Another surprising data that we have found is that 13.6% of Canadian sellers said they had their Amazon account suspended. This situation highlights growing tensions between the e-commerce giant and the small-business community, since sometimes these suspensions are justified, but other times, they are not.

However, despite all the challenges that third-party sellers have suffered, the majority of Canadians who sell on this platform have reported that 2021 has been a better year in terms of revenue compared to 2020.

Only 31.82% of those surveyed said they did not experience any increase in revenue. However, more than half have seen an improvement compared to 2020, with 9.09% doubling. 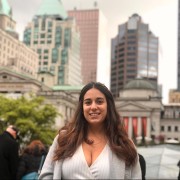