After a successful foray into showbiz last year, Steve Chou is dipping his toes back into ecommerce with a unique product in collaboration with EcomCrew: Chou du Jour, a bottle of Steve Chou’s tears.

In 2020, after suffering huge losses across all his businesses, Chou made the courageous decision to take a break from his career as an entrepreneur to pursue a long-lost passion: performing on stage.

A little fun fact about Chou: He placed 11th runner-up in China’s version of The Voice Kids when he was 9. As luck would have it, a Chinese pop boy band called Lucky 9 was looking for its ninth and final member early last year–Chou saw it as a sign.

At the auditions in Shanghai, Chou blew away producers at Pop Entertainment with his unforgettable and slightly disturbing Adele and Megan Thee Stallion medley. Needless to say, that performance secured his spot in the group, and the rest is history.

At 51, Chou is the oldest and least limber member of the ensemble, but what he lacks in talent, he makes up for with his business acumen. Having amassed an extensive fanbase in just a year, he found the perfect surprise to share with his fans.

During one of many nervous breakdowns mourning his golden years as an entrepreneur, Chou had a lightbulb moment. He saw an opportunity right in front of his very eyes—more accurately, coming out of them. The idea for Chou du Jour was born.

Steve Chou’s tears, a groundbreaking product, can be used as a hydrating mist, glass cleaner, or simply a desk ornament to remind you that life could be worse. Chou du Jour is paraben- and sulfate-free, just 100% distilled misery and failure. It’s cruelty-free, of course.

Since the launch last month, experts and critics have called it “revolutionary,” “profoundly disruptive,” and “good for a boost in self-esteem.” As of writing, a little over half a million bottles of Steve Chou’s tears have already been sold across the US alone.

At a press conference, Mrs. Chou, who recently launched her own content website called “My Husband Quit His Job… So He Became a Singer Instead,” expressed her excitement about her husband’s new endeavor. “His failure is our success,” said Mrs. Chou.

To celebrate the success of Chou du Jour, the singer and EcomCrew will be embarking on a world tour, where Steve Chou’s tears will be shed and bottled LIVE! The North American leg will begin this summer. Dates will be announced soon, so make sure to follow us on our socials.

For a limited time only, you can get a free signed photo with every purchase of two bottles of Steve Chou’s tears. Chou du Jour is available on Amazon, Walmart, and select 7-Eleven outlets worldwide. 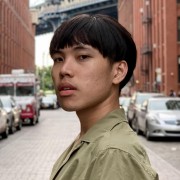 Christian has years of experience as a PR and lifestyle writer for a newspaper. He is currently exploring the ecommerce space as a content writer for EcomCrew. When he’s not on the clock, he’s usually watching Netflix while enjoying a cup of iced coffee or milk tea.

How to Flip Domain Names