The pandemic caused many businesses worldwide to close, but it was generally advantageous to most ecommerce sellers as customers switched to online shopping during the lockdowns. FBA aggregators also benefited from this. But how are they faring as the world slowly goes back to normal?

We asked FBA aggregators how their businesses are doing and how it compares with the last two years.

Related Podcast: E431: Struggles of Running an E-Commerce Business Amid A Pandemic

What Are FBA Aggregators?

FBA aggregators or rollups are companies that buy Amazon FBA businesses. They then operate these businesses and scale them in order to broaden their reach and generate more profits. This allows the original owners to exit the business while the aggregator gets to add another asset to its portfolio.

FBA aggregators are able to scale the brands they acquire because they have more resources and expertise in areas including technology, marketing, and supply chain management, thanks to the funding they get from institutional investors.

How Much Did COVID Affect Ecommerce and Amazon?

According to the United Nations Conference on Trade and Development (UNCTAD)  the average share of internet users who made online purchases increased from 53% in 2019 to 60% in 2020 and 2021. The change is more significant in developing countries, with some even seeing twice as many online shoppers.

Digital Commerce 360 reports that US Consumers spent $218.53 billion more on ecommerce during 2020 and 2021, which both sellers and aggregators took advantage of. Amazon also continued to expand, adding 85 new countries to its list and building more warehouses.

In their 2021 Small Business Empowerment Report, Amazon emphasized how it provided 3P sellers with benefits that helped improve their businesses. And even after an overall disappointing Q1 2022 earnings, Third-Party Seller Services are still up 7% Y/Y. 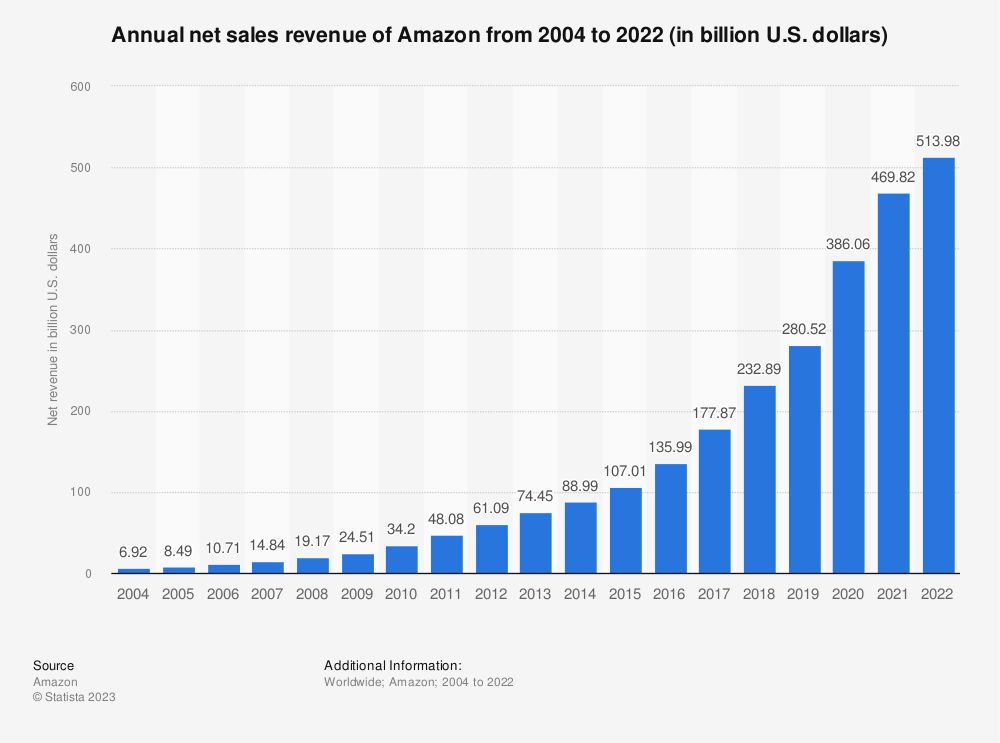 Amazon’s greatest overall dollar increase in terms of revenue was in 2020 and 2021. Source: Statista

Amazon did face competition from the likes of Walmart and eBay during the pandemic, but the Everything Store just had so much more experience and logistics when it comes to ecommerce.

FBA Aggregators During the Pandemic

With more online orders, a lot of Amazon FBA businesses became much more profitable. Some brand owners end up realizing they don’t have the system and capital to scale as fast as they want to, while some want to escape the hassles of running a business. That, along with the promise of a big paycheck, is why a lot of Amazon brand owners opted to take the exit.

During 2020 and 2021, FBA aggregators were heavily capitalizing on this. They found more investors and raised millions in funding. For example, Razor Group raised $125 million, while Branded raised $150 million.

Aggregators have been raising funds aggressively since the pandemic, but the cumulative capital they raised is starting to flatline since the start of 2022.

Thrasio, one of the biggest FBA aggregators, raised another $1 billion in funding in 2021. According to TeleCrunch, it was acquiring an average of 1.5 businesses per week, with over 200 brands under its belt. However, in 2022, the company laid off up to 20% of its staff at the same time that it appointed a new CEO. The move is suspected to be related to its hypergrowth. Essentially, the company was growing too fast that it can no longer keep up.

Between 2020 and 2021, aggregators were acquiring FBA businesses left and right that EcomCrew made a podcast series about it. If you want to learn more about FBA aggregators and how you can sell your business for top dollar, here are some episodes you can listen to:

FBA Aggregators Are Still Acquiring in 2022

We’re still not completely out of the woods yet when it comes to COVID, but people are going back to brick and mortar stores again. So we asked FBA aggregators whether they paused acquisitions in 2022 to see if they still feel optimistic that FBA businesses will continue to do well post-COVID.

We continue to acquire the leading eCommerce businesses around the globe and see ample opportunities in the market going forward. –Razor Group

All those who responded answered yes, with some even saying that the pandemic actually helped accelerate acquisitions. Flummox, for example, recently raised its first round of financing and is preparing to build up its portfolio even more. Quiet Light Brokerage reported that April 2022 was their second-best month ever.

On the other hand, there are signs that some FBA aggregators are facing headwinds. Boopos, a lending platform that specializes in M&A financing, said they saw an increase in acquisitions by their buyers owing to the fact that aggregators are not as active, giving smaller buyers a chance. This view is shared by Forum Brands, which observed that “other buyers have recently become more selective with acquisition strategy, relative to the acceleration we saw take place in 2021.”

Some FBA aggregators may have paused or decreased their acquisitions as reported by Marketplace Pulse, but just because they do does not mean that they are pessimistic about the success of FBA businesses. Some may just be restrategizing, considering the new developments in ecommerce.

Branded, for example, is focusing less on M&A and more on product launches because it sees more opportunities in building upon its existing brands. On the other hand, The Mothership says that while it has increased acquisitions this year, it’s not aggressively pursuing Amazon FBA acquisitions because it is not “seeing sufficient quality at multiples [it’s] happy with.”

Post-COVID, we have seen continued consumer demand with some moderate headwinds and tailwinds taking hold. –Branded

Aggregators employ different strategies, but the majority of those who responded to our questions continue to be optimistic about buying and scaling FBA businesses. In fact, Razor Group recently completed a $50 million landmark transaction.

We also asked FBA aggregators about their biggest challenges in deciding whether to seal the deal with brand owners. These are the most common ones:

Finding the right brand. Aggregators look at a brand’s whole profile, diving into whether the brand is capable of growth and if it fits with the rollup’s portfolio strategy. They look at both financial performance and transferability.

The biggest challenge right now is being able to predict future performance based on current position or historical performance. Many brands went +50% / +100% in 2021 and are correcting maybe -20% now, and it’s difficult to forecast where they are headed to next. –Boopos

General business challenges. Just as any other business owner, FBA aggregators are also affected by inflation, supply chain problems, and competition on Amazon.

Post-acquisition problems. The acquisition is just the first step. Even a well-established brand can be hard to manage by people who are new to the business. That’s why Branded predicts more aggregators will be requiring founders to stay on board longer.

Best of Both Worlds

Even though life is going back to normal in a lot of countries including the United States, the effects of COVID can still be felt in ecommerce. While people can now go out and shop in brick-and-mortar stores, online shopping is poised to remain strong because of its convenience.

We can’t know for sure what the future will look like for online marketplaces, but it’s leaning towards omnichannel. Businesses acquired by FBA aggregators will have an easier time managing this type of arrangement, owing to their resources and expertise. How to Publish Your Book on KDP (Kindle Direct Publishing)